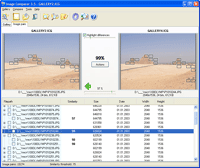 And you probably have lots of duplicates, if you're like most picture-takers. It seems like the best shots stand alone, but there will be 20 poor shots of the same things. When you take a photo and thanks to the magic of digital cameras you can see it immediately, you instantly know whether the photo was a good one or not. If it's too dark, blurry, off-center, or you discover you've decapitated Aunt Mae, chances are good (oh, about 100%) that you took another to replace it.

And most betting folk would lay odds that you took a few more, because each photo was dark or wrong in some way. So the pictures you took that came out perfect are pretty unique, while the less-great shots number in the dozens, and they're all very similar. Maybe you're very organized and efficient and you deleted all but the best of those before you even downloaded the photos, or you downloaded them and immediately deleted all but one. If not, all those similar pictures are waiting on your hard drive for image comparison software to come and cull them.

In cases like that, often we don't even get one good shot worth keeping, but we stubbornly refuse to delete them because the moment was special, or we just feel strange about deleting photographs. When your image comparison software detects the string of duplicates, you can try to look at them with an objective eye and decide whether any of them is good enough to remain.

If you're worried about using image comparison software because you don't want to lose some pictures, you can stop worrying now. The software won't detect duplicates and zap them into space automatically. You can look through all the shots it detects and make decisions on each one if you want to. You'll have complete control about which pictures are kept and which are deleted. The software should detect the best photo from a group of duplicates, but if you'd really rather keep a different one for some reason, of course you can make that decision.

Image comparison software isn't designed to take away your choices, but merely help you choose how best to thin your digital photo collection. Some programs are only useful for finding exact duplicates, which does serve a purpose. But the best programs also find those shots that are just slightly different, like the pictures you kept taking to get just right. You'll have many more of those similar shots on your system than you will exact duplicates. With good image comparison software, you'll have help deciding which shots are the very best.

If you are interested in picture comparison software you may take a look at Image Comparer™. It is a quick and easy solution.